This section provides a deeper understanding of some of the concepts surrounding Concourse.

An understanding of the basics of Concourse concepts, such as pipelines, jobs, etc, is recommended as parts of this section might assume a level of knowledge from them. This section is not necessary for using Concourse but are more for experienced users that want to dig deeper into how Concourse works.

Concourse is a fairly simple distributed system built up from the following components. You'll see them referenced here and there throughout the documentation, so you may want to skim this page just to get an idea of what they are. 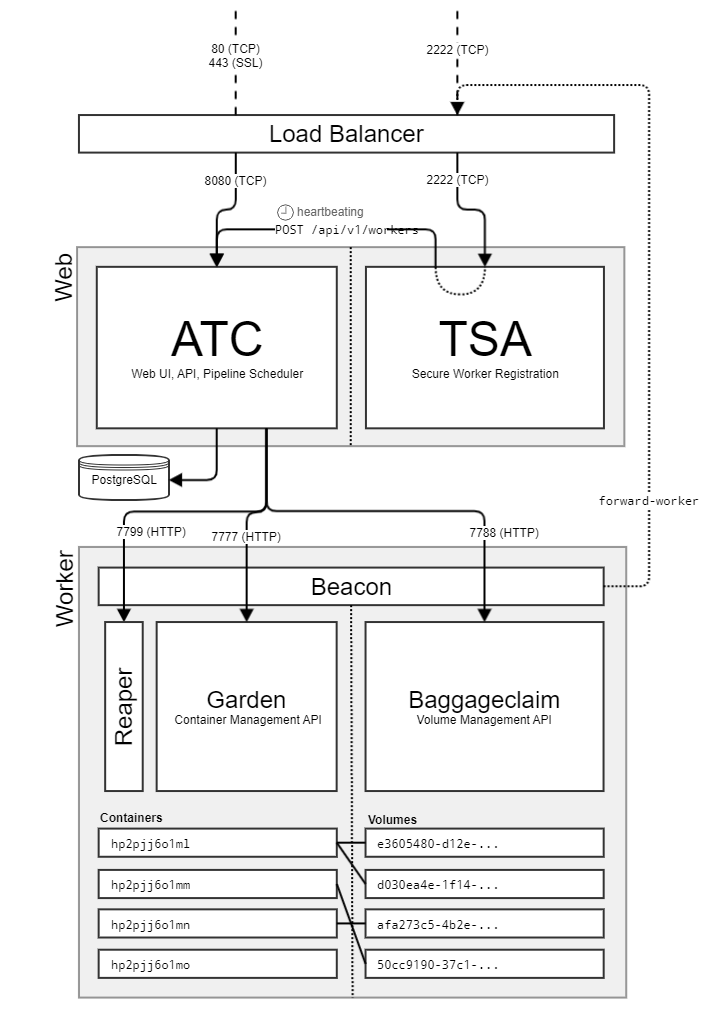 The ATC is the heart of Concourse. It runs the web UI and API and is responsible for all pipeline scheduling. It connects to PostgreSQL, which it uses to store pipeline data (including build logs).

Multiple ATCs can be running as one cluster; as long as they're all pointing to the same database, they'll synchronize using basic locking mechanisms and roughly spread work across the cluster.

The ATC by default listens on port 8080, and is usually colocated with the TSA and sitting behind a load balancer.

Note: for fly intercept to function, make sure your load balancer is configured to do TCP or SSL forwarding, not HTTP or HTTPS.

There are multiple components within the ATC that each have their own set of responsibilities. The main components consist of the checker, scheduler, build tracker and the garbage collector.

The checker's responsibility is to continously checks for new versions of resources. The scheduler is responsible for scheduling builds for a job and the build tracker is responsible for running any scheduled builds. The garbage collector is the cleanup mechanism for removing any unused or outdated objects, such as containers and volumes.

The TSA is a custom-built SSH server that is used solely for securely registering workers with the ATC.

The TSA by default listens on port 2222, and is usually colocated with the ATC and sitting behind a load balancer.

The TSA implements CLI over the SSH connection, supporting the following commands:

Workers are machines running Garden and Baggageclaim servers and registering themselves via the TSA.

Note: Windows and Darwin workers also run Garden and Baggageclaim servers but do not run containers. They both use houdini to fake making containers. Windows containers are not supported and Darwin does not have native container technology.

Workers have no important state configured on their machines, as everything runs in a container and thus shouldn't care about what packages are installed on the host (well, except for those that allow it to be a worker in the first place). This is very different from workers in other non-containerized CI solutions, where the state of packages on the worker is crucial to whether your pipeline works or not.

Each worker registers itself with the Concourse cluster via the TSA.

Workers by default listen on port 7777 for Garden and port 7788 for Baggageclaim. Connections to both servers are forwarded over the SSH connection made to the TSA.

A worker in this state is registered with the cluster and ready to start running containers and storing volumes.

A worker in this state was previously registered with the cluster, but stopped advertising itself for some reason. Ususally this is due to network connectivity issues, or the worker stopping unexpectedly.

If the worker remains in this state and cannot be recovered, it can be removed using the fly prune-worker command.

The concourse land-worker command will put a worker in the LANDING state to safely drain its assignments for temporary downtime.

The ATC will wait for builds on the worker for jobs which aren't interruptible to finish, and transition the worker into LANDED state.

A worker in this state has successfully waited for all non-interruptible jobs on it after having concourse land-worker called. It will no longer be used to schedule any new containers or create volumes until it registers as RUNNING again.

The concourse retire-worker command will put a worker in the RETIRING state to remove it from the cluster permanently.

The ATC will wait for builds on the worker for jobs which aren't interruptible to finish, and remove the worker.